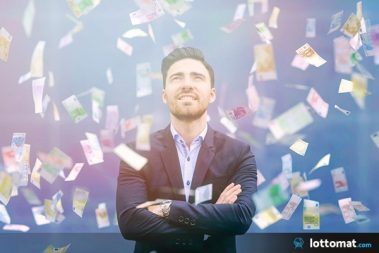 So many names could be given at the beginning of this article! A lot! The history of lotteries, like the California Lottery or the Washington Lottery, is full of people who after winning millions, weeks or months later had already been ruined. That’s why I will not choose the most famous cases, I’ll just tell the story of David Edwards.

The amount that David Lee Edwards won in 2001 wasn’t – especially for the time and with the jackpots in American lotteries taken into account – even close to the record. 27 million dollars. It turns out it was enough to sink to the very bottom if not lower. While claiming his winnings, Edwards already promised himself that he may spoil himself a little with this and that, but overall he was going to respect his money, because there were so many people without a dime to their name, after all. Little did he know that he would join them very, very soon.

David wasn’t even able to talk about his spendings. It just got spent away. Can you imagine it? 12 million dollars SPENT AWAY just like that within one year from winning. The shopping list included, obviously, a luxurious mansion, a private jet, but also two companies and three racehorses (and it just happens that none of them ever won a single race). He also became an owner of a giant collection of fake weapons and other items, cars and all those other things that real first-generation millionaires like to surround themselves with. The second generation won’t get to join the millionaire ranks, though, because it only took 5 years for the winnings to be all gone.

What becomes of millionaires

Edwards died in 2013. Not in his house, not even at a hospital. Worse! Not even in the street, but in a filthy dump filled with human feces. Somewhere between running out of money and dying, he also lost his wife. Then there were also debts which were just about as scary as the winnings were great before that. He had just enough money left to buy drugs with. Except it was actually bought on credit too, anyway. David had literally nothing left. Later he even lost hope. His daughter, for whom he had bought a gold cart worth several dozen thousands dollars before, was left with no inheritance, except for problems to solve.

We know the moral of this story

He who never had to handle large amounts of money will never learn it overnight. This and dozens of other examples like this teach us that a much smarter way to start spending is to take classes to manage more than several dozen zloties. This investment could really be profitable if you are winning millions.