How much can you win in lotteries? The greatest winnings in history 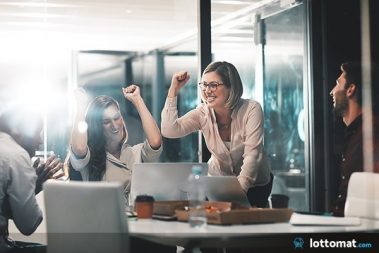 Every lottery gets the imagination running, and the temperature rises with the potential winnings amount. There is no shortage of millionaires in the history of gambling, but there can only be one record holder for every game. What are the greatest winnings in history?

It’s Powerball where the results look the best. Out of the 10 highest winnings, as many as seven were in this exact American game. The maximum winnings when it comes to Powerball results were more than one and a half billion dollars – or they would be if it was paid in installments. This time, which was on January 13th 2016, the winning Powerball numbers were hit by – as many as, or only – three people. The winners chose to claim the whole amount at once, which means that each of them got, no kidding, 983.5 million dollars. The next record winnings in American lotteries are over 480 million at once (at Powerball as well), 475 million and 346 million for Mega Millions numbers.

Compared to the American games like Ohio Lottery or Georgia Lottery, the European ones look like an innocent child’s play in kindergarten. The record is “merely” 204 million Euro (which was won in 2011). There have also been two instances of lucky winners getting 190 million Euro (2012 and 2014). Other than mentioned above, there has only been one another time when the winnings exceeded 100 million Euro, which was 147 million to be exact and it wasn’t won in Euromillions but in the Italy’s SuperEnalotto. In the British Lotto, the record was actually just 53 million Euro (although the lucky winner didn’t have to pay the winnings tax, because the UK doesn’t have one).

Should we get inspired by the records?

Let’s not fool ourselves – the chances of getting into the highest winnings club are next to zero. Still, this kind of data really does get the imagination running. And it’s not even about how the American lotteries, like TXLottery or GA Lottery, could easily make a Polish person a billionaire. In European ones it won’t be quite so easy and with the kind of amounts we mentioned at the beginning, the Belgian record, which was 13 million Euro, looks really poor. I don’t know a single person, though, who wouldn’t want a few zloty investment to give them this kind of return.

As a bit of trivia, it is worth noting that those winnings are shown in absolute values, which means all of them are quite fresh (let’s say from 2008 onwards). It is quite possible that one of the older “records”, despite its lower absolute value, didn’t come with a higher purchase power. Nobody calculates that, because there’s no need to, but this also means that the position at the top of the chart can never be determined once and for all – the winnings keep growing systematically and even without breaking the bank, one can get incredibly rich.